Our farm is a wonderful place full of history.  Take a virtual tour to see what we're all about!

There have been only three families owning the farm- The Carbaughs, The Masts, and now The Stevensons, who purchased it in 1990.  We've been able to learn so much about our home and its history from the folks who were here before us as we have been privileged to know members of both families and listen to stories that took place long before we called the farm home. The farm is 50 acres square and was originally deeded as a land grant for military service in the Revolutionary War.   It has been a farm continuously since that time, and was also well-known as a blacksmith shop for a period of time as well.  Prior to its use as a farm, it was well-known to local Naitive Americans as well.  We have been told they used part of our farm as a place to shape arrowheads and other tools, and we are lucky enough to have a small collection of arrowheads and other artifacts which have surfaced right here over the years. 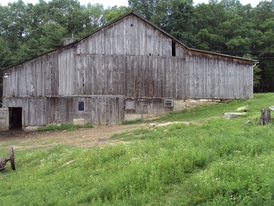 According to the date engraved on the field stone used as the foundation, our barn was built in 1894.  The foundation is made of field stone, all likely gathered right here on the property.  The rough-hewn beams supporting it are enormous timbers from trees that likely grew here as well and were removed both to build the barn and to clear the fields for livestock and crops. It is a style known as a bank barn, meaning it is built into a bank allowing equipment to be driven right into the upper floor.  This is important to be able to store machinery and to unload wagons full of hay.  The upper floor has lots of neat, old-time equipment, including the hay loader or "claw".  This device is a large claw that lowers from the ceiling, picks up a load of loose hay from a wagon, and then is raised by pulleys to take the hay to either side of the barn floor (the hay mows.)  Check out our Hay Making page for a video!  We are also fortunate to have a feed grinder located there as well. There is also a roof extending out which shelters more of our horse-drawn equipment.

The lower floor of the barn houses livestock.  The side visible from the parking area is referred to by us as the "lower part" and is divided into two sections.  The side toward the road is the indoor part of our peafowl enclosure, accessible from inside to provide feed and water..  The rest is currently used as a run-in shed, or a place animals can come and go as they please to escape hot sun, cold wind or rain and snow.  The rest of the lower story of the barn is also used for livestock.  We have stalls for our horses, stanchions for cows, a tack room for harnesses, bridles and saddles, and space to isolate animals or to use as a nursery pen.  There is a wide cement alleyway that houses the manure spreader, which is used to remove the manure from the stalls and return it to the fields to enrich the soil.  The alleyway is also used to harness or saddle the horses and for chores such as shearing sheep or trimming the hooves of any of our various livestock when necessary. 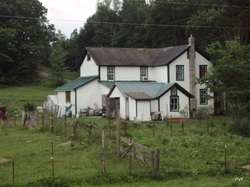 Our farmhouse was built in 1929.  It replaced the original house, which was built on a nearby farm and moved several years later using teams of horses.  The main structure has a spacious kitchen, living room, bedroom and bathroom on the ground floor, as well as five additional rooms on the second floor.  We were told the smallest of these rooms was once the lady of the house's sewing room, and were excited to return it to just that as it now houses Emily's sewing machines, including her own grandmother's machine.   The house also has a dirt-floored basement and an attic.  Despite this abundance of space, it has also been added on to over the years.  In the picture at left, all areas covered with the green metal roofing are additions: more kitchen space; an enclosed porch, called the "summer kitchen"  which has a working shallow well with hand pump for water; a wash house which still contains the round brick structure which would have contained the fire for heating up kettles of water on wash day, and an outhouse.

Living in a building this old never ceases to amaze.  When remodeling or repairing, we have often found newspapers which were used to line and insulate walls and floors.  We've found a number from 1950, a collection of WWII-era ones, and even things like an old flour sack from the now-demolished Tionesta Milling Co. 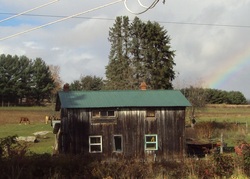 This wonderful building is the oldest current structure on the farm. It is older than the barn (built in 1894) by a few years, although we don't know the exact date it was built. It was built as a forge, and set up so teams of horses could be driven into the building to be shod, and then driven out through the other side once they were finished.  Although there is still the old forge in place, we no longer use it due to fire safety concerns as the chimney running through the building is no longer in good shape.  We now use it as a workshop for housing woodworking tools of all kinds and as a space to work on machinery for repairs and general maintenance. The upper story was previously used for making carriages and equipment. 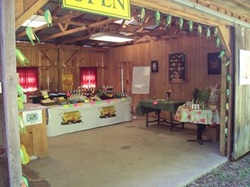 Our farm stand is located roadside on our farm. It is open to the public every Tuesday & Saturday from the last weekend in May to the last weekend of November.  It is the second stand to occupy the current location, as the original stand quickly became too small to accommodate all of our great products and wonderful customers!  Our current stand is fully enclosed, although we do roll back the sliding door whenever we are open.  It has a roof and cement floor, enabling us to be open every weekend, no matter what the weather.

Note: Because it is an enclosed building, we do ask that you leave cigarettes and pets in the car when you visit.  Thanks! 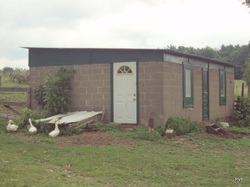 Our hogs' home contains separate pens inside.  We also provide our pigs with an outdoor run, attached right to the pens, so they can go outside to root, wallow and express their natural pig behaviors.  The building was built sometime in the 1950's, and originally had a wooden second story which housed laying hens.  Due to damage caused by a leaking roof, we tore down the upper part of the building a few years ago for safety reasons, and put up a metal roof, making it the single-story building you see now. 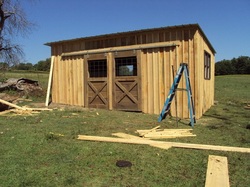 The original farm forge was in the building we call the workshop.  It still contains an area for a coal fire and chimney, but due to the shifting of the building over 100+ years we no longer feel it is safe.  To avoid a structure fire, we decided to build a dedicated forge, which was constructed over Labor Day weekend 2012.  We are able to make a variety of hand-forged metal items using a small coal fire to heat the metal, which is then shaped on an anvil using hammers and a wide variety of other tools, just how these items would have been made 100 years (or more!) ago.  We constructed the actual forge (where the coal fire is) out of field stone on the farm, and moved much of the antique equipment, like the anvil and blower, to the new location.  We are excited to offer hand-forged items for sale.  Please feel free to check out our Etsy store or contact us about custom-made items! 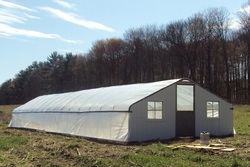 We put up a 72' x 16' greenhouse in 2014 using treated lumber we were able to recycle from a neighbor's unwanted deck that was torn down.  It is used like a hoop house, meaning the plants are put directly in the soil, not in pots.  The greenhouse warms the soil and allows us to put plants in the ground before our last frost, enabling us to produce  things like peppers, tomatoes, and cucumbers earlier in the growing season, but with all the flavor and nutrition you expect!