We have a large incubator to hatch our own chicks and offer day old chicks for sale from early March through early June each year. Currently, we sell a variety of chickens,  Bourbon Red Turkey, Cayuga and Khaki Campbell Ducks, Coturnix quail, and peafowl.  All photos are of our own birds here on the farm, and some of the facts and dates were taken from Storey's Illustrated Guide to Poultry Breeds, a great book for anyone wanting to learn more about all the different varieties of poultry. More information about all the heritage breeds is available from The Livestock Conservancy as well. Please see our Chicks for Sale page for current information about buying live birds.  ​

All photos here are our animals and taken here on the farm.
They are our copyrighted property, please contact us if you would like to use them in any way. 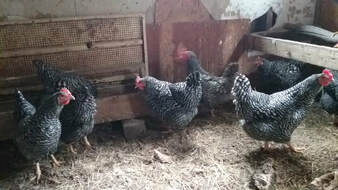 The Plymouth Rock comes in a variety of colors, with barred referring to the black and white pattern you see here.  This is the most common color, with many people shortening the name to Barred Rock.  The Plymouth Rock originated in Massachusets in the 1860's.  They are good layers of large brown eggs and lay well into the winter months without slowing down.  With roosters reaching weights of 10 lbs at maturity, Rocks can also be used for meat birds.  They are a cold-hardy breed with a docile temprement that can be kept inside or out.  Because of this, they were America's most popular chicken breed until the 1950's, when commercial hybrids became popular with factory farms.  The Barred Rock is still a great homesteading or backyard breed today.  It is considered a recovering breed on The Livestock Conservancy's Conservation Priorities List. 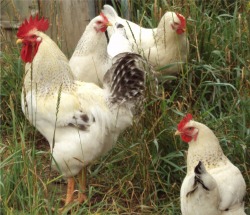 Delaware rooster, left, with 3 hens
These personable birds are Emily's favorites here at the farm.  This breed was created in the 1940's by crossing Barred Rock roosters with New Hampshire hens.  They lay a medium to large deep brown egg and are also commonly used for meat production.  It was the number one meat bird breed in America for about 20 years, up until the invention of the Cornish-Rock hybrid.  It shares many good qualities with the Barred Rock; Delawares are also cold hardy, dual-purpose, calm, and can be raised either in confinement or free range.  Despite all of these wonderful qualities, the breed is in danger of becoming extinct.  Pleasant Valley Farm is proud to be one of the breeders of this chicken, and we do offer chicks for sale in the spring from these birds.   It is considered a breed to watch, improving from its status as critical, on The Livestock Conservancy's Conservation Priorities List. 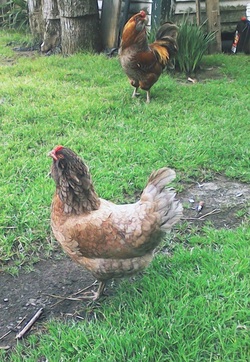 ​This colorful bird is known as the "Easter egg" chicken because  it lays a large egg with a greenish-blue shell.  The birds themselves are colorful too, with colors ranging from black to white with many birds being golden, buff, brownish red or a combination of colors.  They also sport muffs, large tufts of feathers just under the eyes, and beards, which are tufts under the beak.  These are the only birds we raised that have pea combs, which are smaller and avoid frostbite even in the coldest weather.

Polish chickens are best known for their appearance, a crazy topknot of feathers that makes them seem as though they are wearing a wig.  They are an old breed which was recognized by the American Poultry Association in 1874, but Polish chickens show up in European paintings as far back as the 1400's!  Polish chickens come in a variety of colors.  We raise the Gold Laced variety, which have golden feathers with striking black outlines. Our Polish are the standard (large) size, not the smaller bantam variety. Polish are a smaller chicken even at the standard size, so they will weigh less than our larger breeds such as the Delawares and Barred Rocks. They lay medium sized eggs which are white in color. They also make wonderful pets and backyard chickens as they are such fun to watch and are a docile breed.  Polish are listed as a breed to Watch on the Livestock Conservancy's Conservation Priorities List.

Maran chickens are primarily known for their dark brown eggs, which are darker in color than any other breed of chicken.  While not currently recognized as a heritage breed in America (they were not recognized as a breed by the APA until 2011), the origins of this breed trace back to France in the late 1800's.  The name of the breed comes from the French town where they originated by crossing Langshan chickens with local game-type chickens.  Marans come in a variety of colors.  We have the Black Copper Marans, which have black feathers with an iridescent green sheen with reddish copper accents on the neck of both sexes as well as the hackle feathers.  Our Marans have some feathering on their legs as well.

5 week old birds
Broilers are the only birds we do not hatch here at the farm.  We raise Cornish-Rock hybrids, which we recieve through the mail from a commercial hatchery when they are just a day old.  Although we prefer to use species that are self-reproducing, heirloom varieties on the farm, we simply cannot beat the performance of these hybrids.  They go from cute and fuzzy to ready for your table in just 7-8 weeks, while any other breed takes 4-6 months.  Although we use the same hybrid as the factory farms, they are raised in naturally on pasture.  They are raised in small, bottomless pens (called chicken tractors) which are moved to fresh pasture daily.  This benefits the birds by giving them lots of exercise, sunlight, grass and bugs to naturally supplement their diet of high protein feed.  They are never fed any antibiotics or other harmful chemicals, such as arsenic, that factory farms use to enhance growth.  And while the chicken you buy in grocery stores is "enhanced" with up to 20% of its weight consisting of salt water, you get 100% chicken when you buy your fresh or frozen whole chicken from Pleasant Valley Farm.   We believe you'll taste the difference, too! 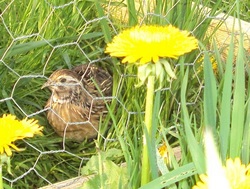 These are the jumbo quail raised for meat or eggs.  They grow incredibly fast, reaching full maturity at just 8 weeks of age.  They will weigh 10-12 ounces at that time, one of the largest varieties of quail available.  They also begin laying eggs at that time.  Eggs are brown and white speckled.  They do fly and need a pen with an enclosed top to keep them in.  These quail are calm and almost friendly. 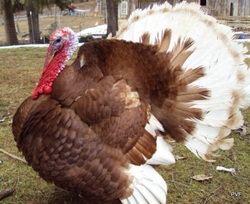 Gobbles, Our Bourbon Red Tom
In 2010 we entered the world of heritage turkeys.  These birds are long lived, slow growing, naturally reproducing, and all heritage breeds were on the verge of extinction due to the use of the Broad Breasted White turkey.  The BB White is the dominant meat breed, making up 99% of all the turkeys raised, sold and eaten in the US today.

The Bourbon Red is currently the most popular heritage breed of turkey.  It was developed around the turn of the century in Kentucky and Pennsylvania and is featured on Slow Food USA's Ark of Taste program for its exceptional flavor and its relative rarity.  We are excited to be a breeder of these relatively rare birds, as we began hatching our first poults in early April, 2011.  Bourbons are a beautiful reddish-brown with white accents on their wing & tail feathers.   They are currently considered a breed to watch on The Livestock Conservancy's Conservation Priorities List. 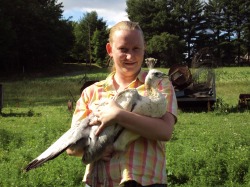 Emily holding a Black Shouldered peahen
Most people know peafowl as peacocks, but that name really refers only to the males.  The females are called peahens.   While peacocks most commonly come in shining blue or albino white, there are actually 185 recognized color variations that exist.  We have two color varieties. Most of our peafowl are the Blue India variety, the typical blue and green males and the females are mostly brown.  We also have the Black Shouldered variety.  The males look similar to the Blue India, but have black shoulders while the females are nearly white. Our peafowl were hatched in July of 2008, and we were very excited to collect our first eggs in late May 2010.  Peafowl live longer than most birds and it is not uncommon for them to live into their 50's (yes, in human years!) so they start laying eggs at a much older age than most birds. Also, it can take three years for the males to grow the full tails for which they are known.  Each eyespot on the male's tails is a separate feather.  Each year, around early August, they molt and lose each and every one. With three males, this can be over 500 individual feathers!   This also means the feathers you see for sale in the farm stand and in our jewelry was painlessly harvested, as they were done with it.  It takes approximately 6 months for the males to regrow their tails each year.  The best times to view the peacocks putting on a show is late May through the end of July, with the best displays usually occurring in the morning or evening on hot summer days..  The pen is viewable from your car, so you can drive by anytime! 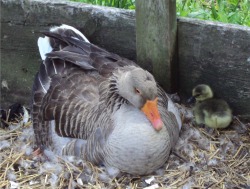 A goose with her newly hatched gosling
The Toulouse is a very old breed of barnyard geese. They originated in France, were brought to England in the late 1700's and to America in the mid-1800's.  They are one of the largest domestic geese, weighing over 20 lbs, and are sometimes used for meat production.  They are cold hardy and good foragers, finding all their own food except in the hardest months of winter, when we supplement their diet.  They are sometimes called the "watchdogs of the barnyard" because their loud honking will alert farmers to anything out of the ordinary, be it visitors in the driveway or coyotes near the livestock.  Our geese are not aggressive unless defending their nests in the spring.  A Toulouse goose can lay up to 20 eggs in the spring, and must sit on them for a month to hatch goslings.  The goslings can swim from birth and the entire flock spends much time on our pond.  While the young will mature in less than a year, these birds can live to be over 100 years old. Unfortunately, the incubator settings that work well for our chicks, turkeys, and ducklings is not suitable for hatching goose eggs with much success, so we typically do not offer goslings for sale. 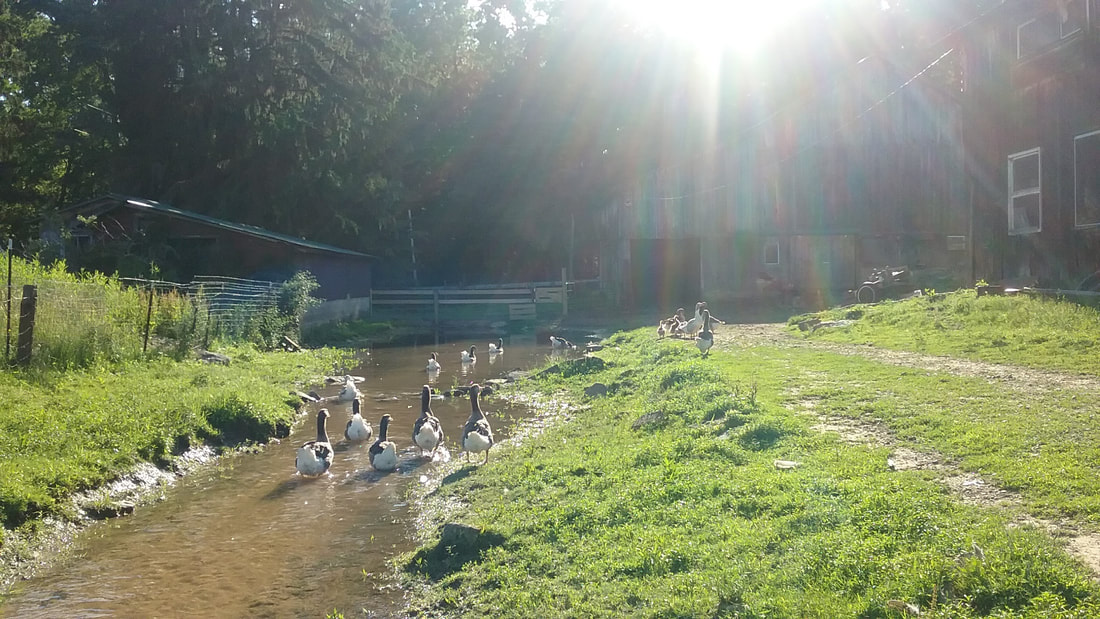