All photos here are our animals and taken here on the farm.
They are our copyrighted property, please contact us if you would like to use them in any way. 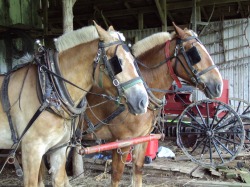 Dolly (at left) and Dixie
While all of the animals on the farm are important, the horses are especially so.  We could not run the farm without them, as we use them instead of tractors in the fields.  We have a team of Belgians: Dixie and her daughter Dolly.  Not only were both of these girls born, raised and trained on the farm, but Dixie's mother was an original member of the Stevenson family when they came to Pleasant Valley Farm in 1990.  Talk about sustainable!  The horses pull a variety of farm tools: the plow, harrow, disc, drag, grain drill and cultipacker for working the soil and planting in the spring; the mower, hay rake, wagon, and provide the power for the hay claw in the barn during haymaking; the cultivator for helping the corn grow, a potato digger for harvesting, the road grader for plowing snow, the manure spreader for cleaning the barn and fertilizing the soil, as well as odd jobs too numerous to list here.  They are a well trained team; even a novice teamster like myself is able to work them, thanks to the thorough training of my husband, Dan and his father.  For more information about how and why we work horses and the equipment used on the farm, please check out the following pages: Why Work Horses, Hay Making and Field Work . Belgian horses are considered a recovering breed on The Livestock Conservancy's Conservation Priorities List. 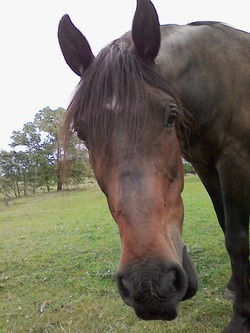 Emily has loved Morgan horses since she was 12, when she met Sara, the horse she would call partner and best friend for the next 20 years.  After Sara's passing, it took a few years to be ready for another Morgan.  Faith came to the farm in 2015 after Emily spied her photo online; she had run through an auction and was purchased by a kill buyer and on track to be shipped for meat.  With the help of Morgan Safenet, Emily was able to rescue her and bring her to the farm.  Although DNA tests were unable to link her with a registration paper and traceable bloodlines, the look and personality of our latest equine addition is unmistakable Morgan!  Foundation Morgans, those without outcrosses in the past hundred years, are considered a critically endangered breed on the Conservation Priorities List, the most serious designation. These horses descend from a single stallion, known as Justin Morgan or Figure, and were instrumental in homesteading in New England, driving cattle across the plains, and were bred by the U.S. Calvary for military horses.  They were instrumental in the development of other American breeds such as the Quarter Horse, Saddlebred, Tennessee Walker and many more. They are a part of the fabric of our country in many ways. Unfortunately, we cannot  document Faith as a Foundation horse without a traceable bloodline, no matter what our suspicions are.  Sara was 100% foundation, and the similarities are unmistakable. This breed is the closest to Emily's heart, and we hope in the future to add another Morgan who has the qualifications to help us be a part of saving this amazing yet critically endangered horse. 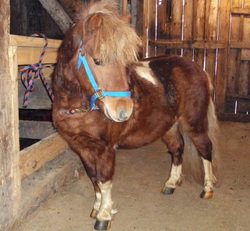 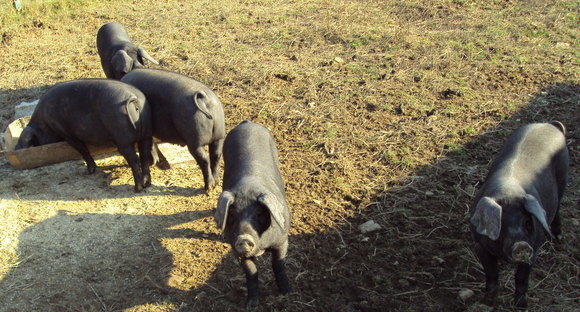 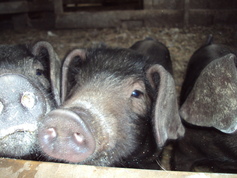 We raise pigs for the pork and sausage we offer at the farm stand.  We have raised a variety of breeds over the years, including the pictured Large Black hogs shown in the photos.While we love heritage breeds, unfortunately we have yet to find a heritage pig that is the perfect fit for our farm.

We raise registered Dexter cattle and are members of the Purebred Dexter Cattle Association of North America.  Our first girl was named Finniat, and since then our breeding operation has expanded to 4 brood cows and a bull.  All beef featured at the farm stand is now coming from calves born here on the farm and raised on pasture with plenty of room to roam and a natural diet.  We chose the Dexter breed because they were descended from the family cows of southern Ireland, and in addition to producing enough milk for a family, unwanted calves (usually the males) can be raised as beef.  They are smart cows who can also be trained as oxen for pulling power, and we began training a team of oxen, Maude & Belle, when they were born in the spring of 2013 .  They are also the smallest non-miniature breed of cow and so require less space and feed to reach full productivity.  Dexters are considered a recovering breed on The Livestock Conservancy's Conservation Priorities List. 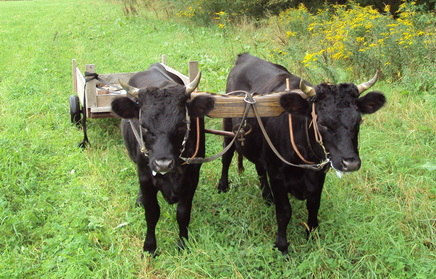 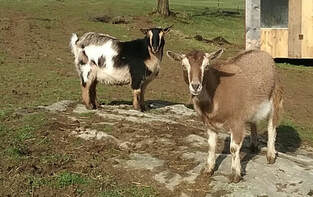 Amos and Alice
Goats have wonderful personalities, and our pair of goats are no exception.  Amos is black, white and brown and has blue eyes, while Alice is brown and white.  They are both extremely friendly and often greet visitors who are feeding the birds.  They love to eat the small brush and thorny things in the pasture, serving as all-natural weed-eaters. 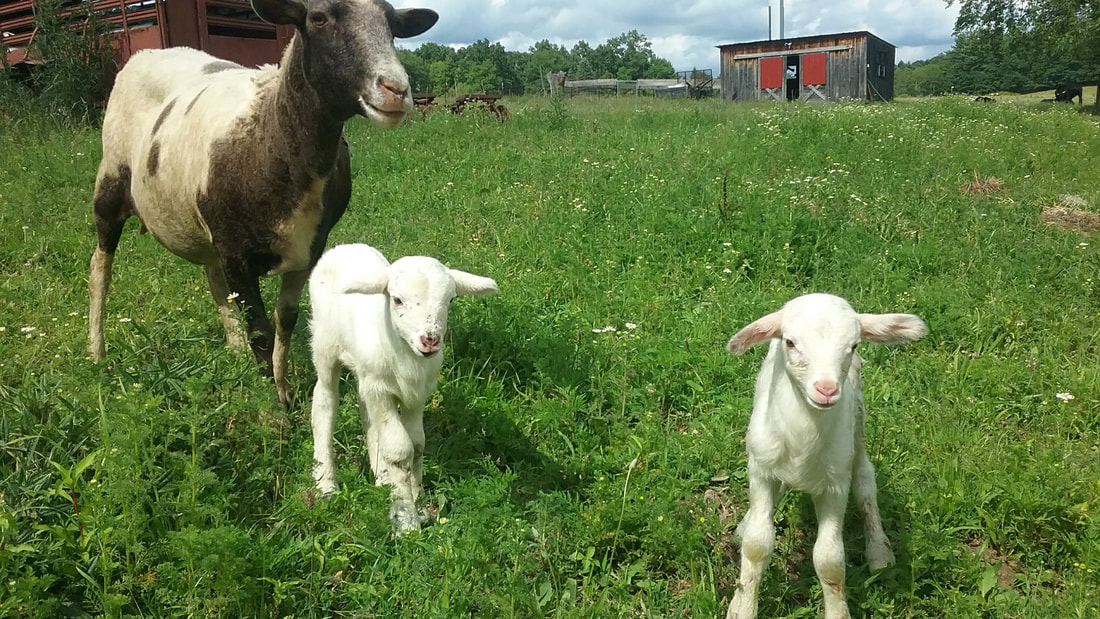 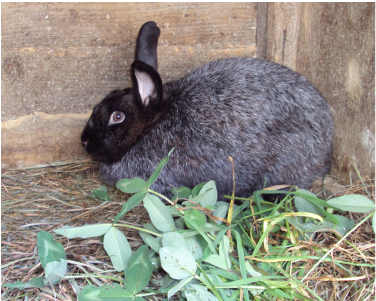 One of our Silver Fox does
It all started with a pet house rabbit of Emily's named Murphy.  Then came his girlfriend, Sheena.  Then, in true rabbit style, 12 babies all at once!  Although we no longer keep rabbits in the house, we do continue to raise and breed rabbits.

We now have a heritage breed of rabbit known as Silver Foxes.  These are large meat rabbits, with males maturing at around 10 lbs live weight, and doe (female) rabbits reaching 11-12 lbs.  It is considered a threatened breed on The Livestock Conservancy's Conservation Priorities List. They are actually so uncommon that it is estimated there are more Giant Pandas alive today than Silver Fox Rabbits!  They have a variety of wonderful traits besides their size which led to us choosing them as the heritage rabbit we were most interested in.  They are born completely black or gray, with white hairs ("silvering") appearing as they grow.  The long fur is valuable as a pelt, and will even stand on end if petted the wrong way and remain upright until petted down, a trait found in Arctic foxes which led to the name of the breed.  We also find them to be very docile rabbits that are easy going and easy to handle and make excellent mothers.

We often offer live rabbits for sale for pets, meat, or for starting your own rabbitry! Check the Stock for Sale page for what is currently available.   Although we do not show, we take our rabbits seriously and have some with pedigrees, and Emily is a member in both the American Rabbit Breeders Association and the National Silver Fox Rabbit Club. The farm is also a registered rabbitry, meaning no other rabbitry can be called Pleasant Valley Farm. 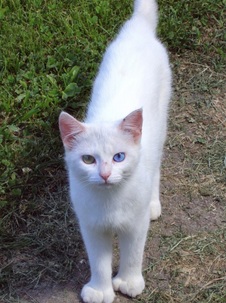 Every farm has cats.  More than pets, on a farm they help to control the rodent populations that are attracted to livestock feed.  You're likely to see at least one when you stop and visit us.  Pictured is Itty Bit.  As her name suggests, she's rather small.  She's all-white, and is pretty unique in that she has two different colored eyes and an extra toe on each foot.  She's also the best mouser we've seen, but so smart that even the hens know she won't eat the baby chicks.  She is a bit shy, though, and is usually too skittish to let strangers pet her.  You may also see a variety of other cats around, as there are always quite a few here, often some friendly felines, and quite possibly some kittens to cuddle.  (And no, we don't need any more kittens, thanks!)