Making hay is one of the most important tasks of the summer.  The amount and quality of the hay determine how many animals we will be able to keep over the winter.  Good quality hay will also cut back or eliminate the need for supplemental grains for much of our livestock.  Here at Pleasant Valley Farm, we make hay the old-fashioned way, using only horse drawn machinery.  We put hay up loose instead of in bales.  All pictures were taken here at the farm and depict our team and equipment. 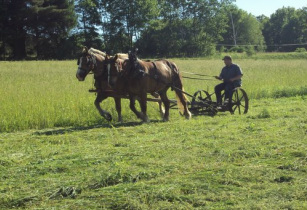 Our McCormick-Deering No. 7 mower in action
Our mower is a McCormick-Deering No. 7 mower. The long arm with teeth you see in the lower left of this picture is what does the cutting.  The hay is cut once, just inches above the ground, unlike a regular lawnmower, whose spinning blades chop the grass into many short pieces.  The fresh-cut hay falls in a thin layer on the ground where it is left to dry.  While there are many variables such as temperature and humidity, drying usually takes 2-3 days.

Dan raking hay into windrows
When hay is cut, there is an even layer of drying grass across the entire field.  The side delivery rake uses four horizontal bars equiped with tines moving in a circular motion to roll up the hay into windrows.  This also fluffs and turns the hay, allowing it to dry more quickly as well.  If used on the field more than one time, this rake can also combine lots of smaller windrows into a few larger ones.  If a baler was being used, the baler would then pass over the windrows and turn them into bales.  Putting hay up loose, we usually drive over the windrows with the hay loader to gather it onto the hay wagon.


The side delivery rake seen here is being pulled by a forecart (red with blue seats).  The forecart serves as a way to hitch the horses to various pieces of machinery that are not currently equiped with the long wooden tongues.  It also allows room for a passenger to ride along in comfort! 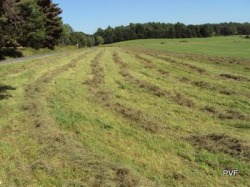 The hayfield in windrows after using the side delivery rake 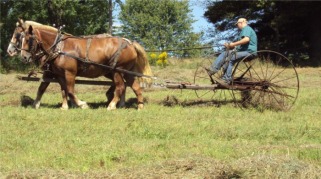 Gathering up the windrows with the dump rake
The dump rake is most commonly found decorating rural lawns these days.  Just behind the wheels, there is a set of curved teeth that reach to the ground.  As the rake moves along, it gathers hay with these tines.  When it is full (or at a desired interval) the driver presses a lever with his/her foot, allowing the teeth to come up, away from the ground, releasing the hay into a pile without stopping the horses. It can be used on a mowed hayfield or after the side delivery raked has gone over the field.   While we are glad to have this piece of machinery in working condition in our collection, we  no longer use it regularly, since we have acquired a hay loader, described below.

Releasing the hay into a pile 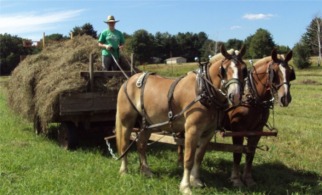 Emily driving the haywagon.
The hay wagon is simply a 16' long bed on two sets of rubber tires.  There are boards on the front and back to keep the load from falling off.   While it is most frequently used for moving hay from the field to the barn, hauling lumber and giving hayrides are other uses it sees from time to time. Hay is forked from the ground using three-tined hay forks.  To pack it down and be able to stack larger loads, the driver or another helper will walk back and forth across the hay.  A ton or more can be loaded onto the wagon each trip this way.

Our hay loader is a John Deere Single Cylinder model, and our "newest" (to us) piece of machinery.  Based on our research, and what we were told by the previous owner, we estimate it was built in the 1920's.  The hay loader attaches to the back of the wagon and is able to rake up the windrows and load them right on to the wagon, eliminating the need to load the hay using a pitchfork. The conveyor belt style is actually fairly rare,  so while we're always excited to add a new piece of machinery to our collection, this one is even more special! As you can imagine, that makes it a huge labor saver, and also enables us to load the wagon much quicker.  When we use the hay loader, we also no longer need to use the dump rake.

When a full load of hay is brought to the barn, it must be moved into the hay mow for storage.  The barn is built into a hillside, so the wagon can back into the upper floor where the hay is stored.  A track runs the length of the peak of the barn roof and a large claw for moving the hay runs on the track.  When the wagon is backed into the barn, a rope and pulley system lowers four metal hooks, which form a claw much like the ones you see in arcades for picking up stuffed toys (only much larger!).  These hooks are pushed into the hay piled on the wagon.  The horses are then hitched to a large hemp rope that operates the claw.  As they pull forward, the hay-filled claw raises to the ceiling.  When it reaches the top, it hooks onto a small trolley that takes the hay to the side of the barn.  Once there, a trip rope is pulled and the hay falls to the floor and the claw is pulled back to the center of the barn for another load.  A large load of hay can be unloaded in about three loads with this system. The trolley can be set to travel to the opposite side of the barn once the first mow is filled. 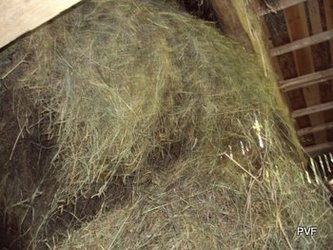 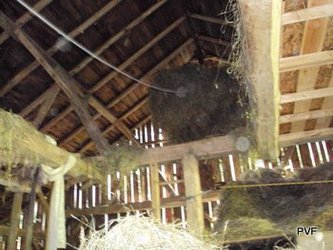 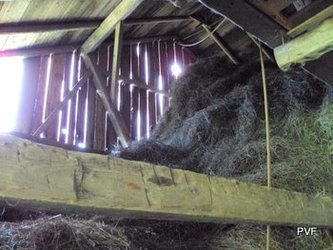